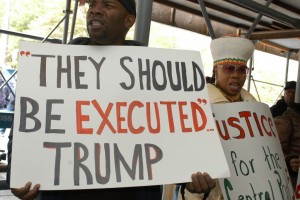 As evidence grew in 2002 to exonerate the Central Park Five, their supporters demanded an apology from Donald Trump, who, soon after their arrest, had called for the return of the death penalty.   Credit: Frances Roberts

Let’s get the obvious stuff out of the way. Yes, Donald Trump is a vile racist. He regularly uses dehumanizing language about nonwhites, including members of Congress. And while some argue that this is a cynical strategy designed to turn out Trump’s base, it is at most a strategy that builds on Trump’s pre-existing bigotry. He would be saying these things regardless (and was saying such things long before he ran for president); his team is simply trying to turn bigoted lemons into political lemonade.

What I haven’t seen pointed out much, however, is that Trump’s racism rests on a vision of America that is decades out of date. In his mind it’s always 1989. And that’s not an accident: The ways America has changed over the past three decades, both good and bad, are utterly inconsistent with Trump-style racism.

Why 1989? That was the year he demanded bringing back the death penalty in response to the case of the Central Park Five, black and Latino teenagers convicted of raping a white jogger in Central Park. They were, in fact, innocent; their convictions were vacated in 2002. Trump, nevertheless, has refused to apologize or admit that he was wrong.

His behavior then and later was vicious, and it is no excuse to acknowledge that at the time America was suffering from a crime wave. Still, there was indeed such a wave, and it was fairly common to talk about social collapse in inner-city urban communities.

But Trump doesn’t seem to be aware that times have changed. His vision of “American carnage” is one of a nation whose principal social problem is inner-city violence, perpetrated by nonwhites. That’s a comfortable vision if you’re a racist who considers nonwhites inferior. But it’s completely wrong as a picture of America today.

For one thing, violent crime has fallen drastically since the early 1990s, especially in big cities. Our cities certainly aren’t perfectly safe, and some cities — like Baltimore — haven’t shared in the progress. But the social state of urban America is vastly better than it was.

On the other hand, the social state of rural America — white rural America — is deteriorating. To the extent that there really is such a thing as American carnage — and we are in fact seeing rising age-adjusted mortality and declining life expectancy — it’s concentrated among less-educated whites, especially in rural areas, who are suffering from a surge in “deaths of despair” from opioids, suicide and alcohol that has pushed their mortality rates above those of African-Americans.

And indicators of social collapse, like the percentage of prime-age men not working, have also surged in the small town and rural areas of the “eastern heartland,” with its mostly white population.

What this says to me is that the racists, and even those who claimed that there was some peculiar problem with black culture, were wrong, and the sociologist William Julius Wilson was right.

When social collapse seemed to be basically a problem for inner-city blacks, it was possible to argue that its roots lay in some unique cultural dysfunction, and quite a few commentators hinted — or in some cases declared openly — that there was something about being nonwhite that predisposed people toward antisocial behavior.

What Wilson argued, however, was that social dysfunction was an effect, not a cause. His work, culminating in the justly celebrated book “When Work Disappears,” made the case that declining job opportunities for urban workers, rather than some underlying cultural or racial disposition, explained the decline in prime-age employment, the decline of the traditional family, and more.

How might one test Wilson’s hypothesis? Well, you could destroy job opportunities for a number of white people, and see if they experienced a decline in propensity to work, stopped forming stable families, and so on. And sure enough, that’s exactly what has happened to parts of nonmetropolitan America effectively stranded by a changing economy.

I’m not saying that there’s something wrong or inferior about the inhabitants of, say, eastern Kentucky (and no American politician would dare suggest such a thing). On the contrary: What the changing face of American social problems shows is that people are pretty much the same, whatever the color of their skin. Give them reasonable opportunities for economic and personal advancement, and they will thrive; deprive them of those opportunities, and they won’t.

Which brings us back to Trump and his attack on Representative Elijah Cummings, whom he accused of representing a district that is a “mess” where “no human being would want to live.” Actually, part of the district is quite affluent and well educated, and in any case, Trump is debasing his office by, in effect, asserting that some Americans don’t deserve political representation.

But the real irony is that if you ask which congressional districts really are “messes” in the sense of suffering from severe social problems, many — probably most — strongly supported Trump in 2016. And Trump is, of course, doing nothing to help those districts. All he has to offer is hate.

The Times is committed to publishing a diversity of letters to the editor. We’d like to hear what you think about this or any of our articles. Here are some tips. And here’s our email:[email protected].

Paul Krugman has been an Opinion columnist since 2000 and is also a Distinguished Professor at the City University of New York Graduate Center. He won the 2008 Nobel Memorial Prize in Economic Sciences for his work on international trade and economic geography. @PaulKrugman
Comments are closed.