Growing inequality in the United States shows that the game is rigged. 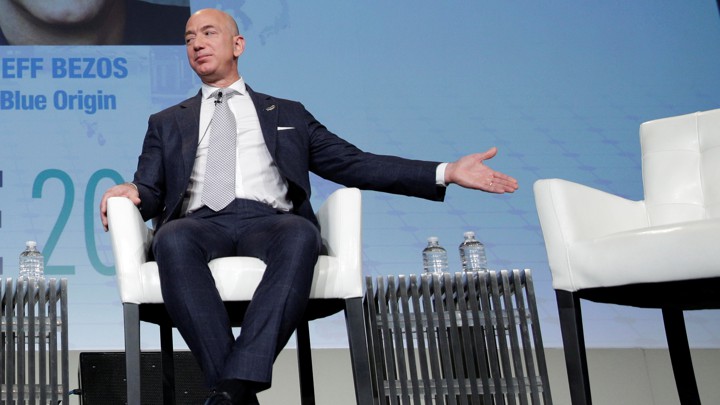 Last month, Bloomberg reportedthat Jeff Bezos, the founder of Amazon and owner of the Washington Post, has accumulated a fortune worth $150 billion. That is the biggest nominal amount in modern history, and extraordinary any way you slice it. Bezos is the world’s lone hectobillionaire. He is worth what the average American family is, nearly two million timesover. He has about 50 percent more money than Bill Gates, twice as much as Mark Zuckerberg, 50 times as much as Oprah, and perhaps 100 times as much as President Trump. (Who knows!) He has gotten $50 billion richer in less than a year. He needs to spend roughly $28 million a day just to keep from accumulating more wealth.

This is a credit to Bezos’s ingenuity and his business acumen. Amazon is a marvel that has changed everything from how we read, to how we shop, to how we structure our neighborhoods, to how our postal system works. But his fortune is also a policy failure, an indictment of a tax and transfer system and a business and regulatory environment designed to supercharging the earnings of and encouraging wealth accumulation among the few. Bezos did not just make his $150 billion. In some ways, we gave it to him, perhaps to the detriment of all of us.

Bezos and Amazon are in many ways ideal exemplars of the triumph of capital over labor, like the Waltons and Walmart and Rockefeller and Standard Oil before them. That the gap between executives at top companies and employees around the country is so large is in and of itself shocking. Bezos has argued that there is not enough philanthropic need on earth for him to spend his billions on. (The Amazon founder, unlike Gates or Zuckerberg, has given awayonly a tiny fractionof his fortune.) “The only way that I can see to deploy this much financial resource is by converting my Amazon winnings into space travel,” he said this spring. “I am going to use my financial lottery winnings from Amazon to fund that.”

In contrast, half of Amazon’s domestic employees make less than $28,446 a year, per the company’s legal filings. Some workers have complained of getting timedsix-minute bathroom breaks. Warehouse workers need to pick goods and pack boxes at closely monitored speeds, handling upto 1,000 items and walking as many as 15 miles per shift. Contractors have repeatedly complained of wage-and-hour violations and argued that the company retaliates against whistleblowers. An Amazon temp died on the floorjust a few years ago.

The impoverishment of the latter and the wealth of the former are linked by policy. Take taxes. The idea of America’s progressive income-tax system is that rich workers should pay higher tax rates than poor workers, with the top rate of 37 percent hitting earnings over $500,000. (The top marginal tax rate was 92 percentas recently as 1953.) But Bezos takes a paltry salary, in relative terms, given the number of shares he owns. That means his gains are subject to capital-gains taxes, which top out at just 20 percent; like Warren Buffett, it is possible he pays effective tax rates lower than his secretary does.

Moreover, Amazon itself paid no federal corporate income taxeslast year, despite making billions of dollars in profits. It has fought tooth-and-nailagainst state and local taxes, and has successfully cajoled cities into promising it billionsand billionsand billionsin write-offs and investment incentives in exchange for placing jobs there. (Given that Bezos is a major Amazon shareholder, such tax-dodging redounds directly to his benefit.)

Or consider the country’s low minimum wage, a policy that again benefits corporations at the expense of workers. Amazon’s starting wage is about $5-an-hour below the country’s national living wage, and its median full-time wage is a full dollar below it as well: The company is profitable and has money to invest in operations and expansions because its labor force is so cheap. Of course, it is not cheap for the taxpayer, which ameliorates the effects of poverty wages with policies like the Earned Income Tax Credit, Medicaid, and the Supplemental Nutrition Assistance Program. One in three Amazon employees in the state of Arizona is reportedly on food stamps.

Noncompete agreements are another tool Amazon and other big companies use to suppress the costs of labor and to bolster their bottom lines, to the benefit of major shareholders. Amazon’s contracts have required employees to promise that they will not work for any company that “directly or indirectly” competes with Amazon for 18 months after leaving the firm. Given the breadth of the Amazon’s business, that means taking a job with Bezos might have meant turning down a future job not just at Walmart, but also at postal companies, logistics businesses, warehouses, and retailers. “Amazon appears to be requiring temp workers to forswear a sizable portion of the global economy in exchange for a several-months-long hourly warehouse gig,” The Verge, which reported on the contracts, argued.

Such non-compete and no-poaching clauses used to be common only among executives and other high-income workers, but now roughly one in five workers are covered by them; more than half of major franchise businesses, like McDonald’s, include no-poaching agreements in their contracts. This suppresses wages by reducing competition for workers—and is now seen as one of several reasons wage growth has been so sluggish during the recovery.

Stripping workers of the right to move among employers is just one way that Amazon and other big businesses are flexing their monopoly and monopsony power—again with Uncle Sam helping companies at the expense of workers. Amazon’s dominance in e-commerce, particularly in markets like book-selling, has given it pricing power to squeeze both the companies it purchases goods from and its own employees. A recent studyby The Economistfound that Amazon opening a fulfillment center in a given community actually depresses warehouse wages: In counties without an Amazon center, warehouse workers earn an average of $45,000 a year, versus $41,000 a year in counties with an Amazon center. The data also show that in the two-and-a-half years after Amazon opens a new fulfillment center, local warehouse wages fall by 3 percent.

“In local labor markets that are highly concentrated, concentration contributes to lower wages,” said Sandeep Vaheesan, policy counsel at the Open Markets Institute, a Washington think tank that studies market competition. “Amazon wields a great deal of power over both its workers and its suppliers. Where Amazon distribution centers are located, especially in rural and more exurban areas, they are one of the powerful local employers and likely have a great deal of wage-setting power—and so they can depress wages below what would exist in sort of more competitive and less concentrated market.”

Finally, there is the decline of unions. Since its founding nearly three decades ago, Amazon has again and again sought to prevent the unionization of its workforce, a development that would likely bolster wages and improve working conditions. Amazon has reportedly shut down operations where workers were seeking to organize, fired employees advocating for unionization, hired law firms to counter organizing drives at warehouses around the country, and given managers instructionson how to union-bust. (It has denied retaliating against workplaces seeking collective bargaining.) At the same time, the government, in its regulatory bodies and the courts, has again and again sided against unions and in favor of business owners.

In recent months, the Trump administration has tilted policy to enhance these decade-long trends, rather than to counter them. President Trump himself has hammered Amazon for not paying high enough postage rates, and taken Bezos to task for the Washington Post’s Pulitzer-winning coverage of his administration. Yet his White House has slashed taxes for corporations and the rich, rather than for middle-income workers, all while preserving loopholes and deductions for investment income. It is now reportedly seeking to give away another $100 billion to investors via a capital-gains tax cut. It has reduced companies’ regulatory burdens and appointed the most pro-business Supreme Court in history. It has declined to push for higher minimum wages, or stronger workplace protections.

The result of these decades of trends and policy choices is that Jeff Bezos has accumulated a $150 billion fortune while the average American family is poorer than it waswhen the Great Recession hit. Concerns about such astonishing levels of inequality are not just about fairness, nor are they just sour-grapesing about runaway success. The point is not that Jeff Bezos himself has done wrong by accumulating such wealth, or creating such profitable and world-changing businesses. But wealth concentration is bad for the economy and the country itself, and the government has failed to counter it. Rising inequality fuelspolitical polarization and partisan gridlock. It slows economic growth, and implies a lack of competition that fuels economic sclerosis. It makes the government less responsive to the demands of normal people, potentially putting our very democracyat risk. Bezos’s extraordinary fortune shows that the game is rigged. He just happened to play it better than anyone else.