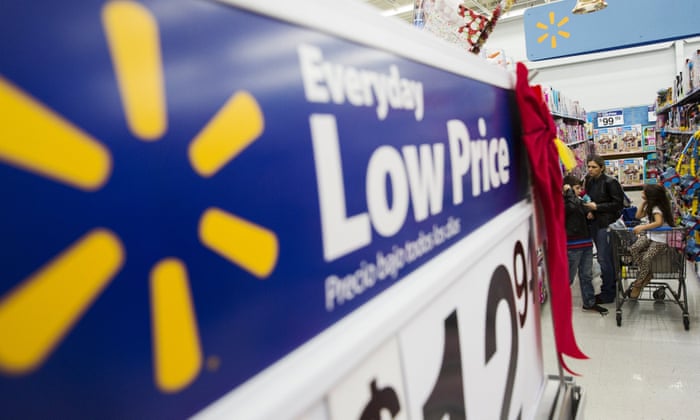 How low can you go? Walmart’s workers don’t want to find out. Photograph: Lucas Jackson/Reuters

Walmart employees are so poor that they are skipping lunch, sharing it or, in some cases, stealing it from their coworkers, some of the company’s workers claimed on Thursday while announcing a fast in protest of the company’s wages.

Starting Friday morning, over 100 Walmart associates who are members of Our Walmart, a workers organization, and about a 1,000 supporters will begin a fast to shine light on what they describe as Walmart’s “poverty pay”.

The protest comes in the run-up to Thanksgiving and the Black Friday shopping bonanza, one of Walmart’s busiest periods. Some of the workers will take their fast to the doorstep of Walmart heiress Alice Walton’s apartment in New York City.

Earlier this year, Walmart announced it was raising wages for about half a million of its employees, paying them at least $9 an hour – $1.75 above the federally mandated minimum wage. The company plans to further increase their pay to $10 an hour next year.

The workers say that’s still not enough and demand that they be paid $15 an hour and be given full-time schedules. The name of the 15-day fast is Fast for 15.

Tyfani Faulkner, a former Walmart customer service manager from Sacramento, California, who worked for company for about five years, will be one of those fasting in protest.

“Every day there are associates who go to work with no lunch, or an unhealthy lunch, because that’s all they can afford. I have seen instances where some would eat another associate’s lunch from the refrigerator because they have nothing to eat,” said Faulkner.

To read the full story, go to